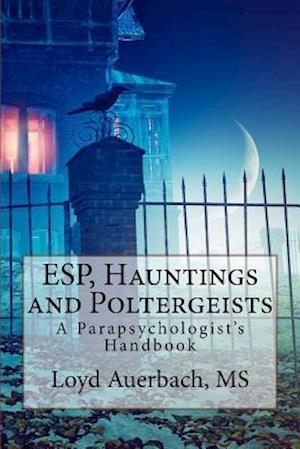 This is a 30th Anniversary reprinting of a book that has been lauded by Newsweek and cited by numerous people -- from students of parapsychology to ghost hunters to celebrity paranormal investigators -- as the book that got them first interested and started on their paranormal journeys and studies. ESP, Hauntings and Poltergeists, first published in 1986, is reprinted with minor changes and minimal updates Note that the authors subsequent books have much of the update material already]. Writing the book during the height of the (now-defunct) accredited Master's degree program at John F. Kennedy University in the San Francisco Bay Area, parapsychologist Loyd Auerbach put together a true handbook for those interested in all forms of psychic phenomena and experiences, with a eye towards investigation of the paranormal (apparitions, hauntings and poltergeists). The material is presented in four sections with appendices. Section One is a "handbook" providing basic foundation knowledge of parapsychology and psychical research, psychic phenomena and experiences, and even the skeptical viewpoint. Section Two takes a look at Pop Culture -- from TV and film to science fiction and comic books -- and news and reality TV coverage of the topics. Section Three is a casebook of sorts, covering famous cases of hauntings (including an expose of the Amityville Horror case) as well as cases investigated by some of Auerbach's colleagues (and his own very first case). Section Four is the handbook for the would-be paranormal investigator / ghost hunter. It's a step by step manual that contradicts so much of what has been altered by television producers for reality TV. Coming from the 100+ years of field investigation of the paranormal by his predecessors, colleagues, and his own experience, this common sense guide will enable people to truly investigate, understand, and generally resolve ghostly issues. Honest and direct, even if you think you know how to investigate, this section alone will enlighten you in ways you may not have imagined. Finally, the Appendices provide resources for any and all interested in the topics covered by the book. There are tools for the investigator in Appendix A. Appendix B provides an updated (2016) list of organizations and resources, a "Who Ya Gonna Call?" directory, as well as the questions you should ask to make sure the ghost hunters or parapsychologists you contact actually are trained or educated and know what they're talking about (and know what they're doing). Additional suggestions for furthering your education in Parapsychology and the paranormal is included in this section. Appendix C provides a long list of suggested reading materials. There have been a few additional more recent titles added to this appendix (2016) as a starting point for the 21st century. Once you read this book, you'll have a real understanding of what the real scientific researchers and investigators have been doing since the 19th century start of the field, how the best investigations are conducted, what parapsychologists generally think of apparitions, hauntings, and poltergeists, and so much more