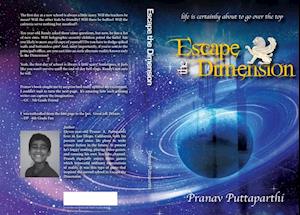 Randy's just an ordinary kid being raised by his single mom, his father having died long ago. At least, that's what Randy's mom always told him, and he's had no reason to disbelieve her. When Randy's accepted into a prestigious school for the gifted, he finds evidence his dad may not be dead. He doesn't have much time to investigate though, because he's too busy trying to survive his weird new school. How weird? Usually schools have names. This one doesn't. It does, however, have a security system made up of holographic children, deadly spiked walls, and a principal who condemns students to a grim alternate reality called the Dimension. Randy, his new friend Jason, and school bully Brian must band together if they're to overcome the principal, his trap-filled school, and the horrors of the Dimension. Randy might learn more about his long-lost father, but first he's going to have to Escape the Dimension.