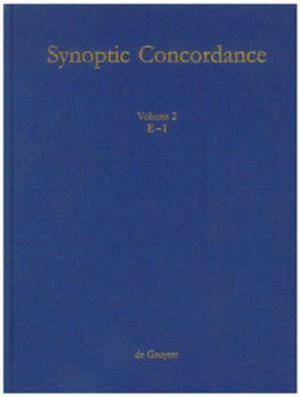 The Synoptic Concordance is a major research tool for the analysis of the first three Gospels, providing an extensive mass of data that greatly facilitates literary and linguistic examination. The advantages of a concordance are combined with those of a synopsis: each occurrence of a word in the synoptic Gospels, along with a section of text that provides its context, is displayed in three columns. The result is that one sees not only the occurrences of a certain word in one Gospel, but also the parallels in the other two Gospels. The Synoptic Concordance presents the whole synoptic situation at one time: all of the differences and similarities are obvious at a glance, so that the first three Gospels can easily be compared according to their divergent terminology and syntax. On the two-document hypothesis, one can see, for example, how Matthew or Luke take over and change their Markan source, or how they differ in the redaction of their Q text. Gray shadowing calls attention to the differing sequence of the verses and pericopes in the three Gospels. By paying attention to this shadowing, one can follow all occurrences of the key word in the original sequence of each Gospel. An appendix gives the relevant verses in the Acts of the Apostles, in order to make available the full linguistic usage of Luke. The research project presupposes that there are literary relationships among the first three Gospels. According to widespread consensus, the two-document hypothesis provides the most plausible explanation of these relationships. The presentation of the text, however, seeks to display the synoptic situation in a way that is independent of any source theory, so as to allow each user to seek his or her own solution. At the beginning of each entry, a chart gives a statistical overview of the usage of the key word in the entire New Testament. A second chart, with a detailed evaluation of the distribution of the key word in the synoptic Gospels, displays how often the usage of the one Gospel agrees with (or differs from) the usage of the other two Gospels. In terms of the two-document hypothesis, one can, for example, find the words that Matthew (or Luke) prefers or avoids, or catch sight of the so-called 'minor agreements.' When relevant, these statistics are also given for recurrent formulas and fixed phrases. These formulas and phrases are indicated by a small letter indexing them (as is usual in concordances). By this means the relevant verses can easily be verified in the synoptic presentation of the occurrences.