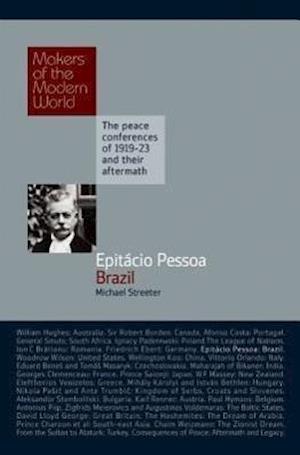 Epitacio Pessoa (1865-1942). Brazil was one of the emerging world powers to be invited to the Paris Peace Conference in 1919. Having jettisoned her empire just thirty years before, the Portuguese-speaking nation was showed signs of becoming one of the financial powerhouses not just of Latin America, but of the world. In Paris, the country's delegation was led by Epitacio Pessoa, a brilliant lawyer who negotiated a deal to rescue Brazilian coffee from the German ports where it had languished since the middle of the war. He also helped win a place at the top table for Brazil in the new League of Nations. Pessoa was then rewarded by being elected president of Brazil even though he was in Paris at the time. Yet even as Brazil enjoyed its moment of triumph on the international stage, the country's political system was starting to unravel. Pessoa's presidency ended in failure in 1922, its modest achievements overshadowed by bitter army revolts. This, then, is the story of Epitacio Pessoa, the Treaty of Versailles and the rise and fall of Brazil's tumultuous First Republic.