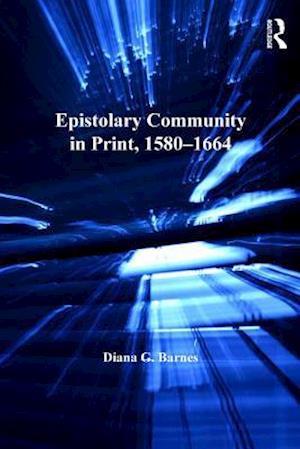 Epistolary Community in Print contends that the printed letter is an inherently sociable genre ideally suited to the theorisation of community in early modern England. In manual, prose or poetic form, printed letter collections make private matters public, and in so doing reveal, first how tenuous is the divide between these two realms in the early modern period and, second, how each collection helps to constitute particular communities of readers. Consequently, as Epistolary Community details, epistolary visions of community were gendered. This book provides a genealogy of epistolary discourse beginning with an introductory discussion of Gabriel Harvey and Edmund Spenser's Wise and Wittie Letters (1580), and opening into chapters on six printed letter collections generated at times of political change. Among the authors whose letters are examined are Angel Day, Michael Drayton, Jacques du Bosque and Margaret Cavendish. Epistolary Community identifies broad patterns that were taking shape, and constantly morphing, in English printed letters from 1580 to 1664, and then considers how the six examples of printed letters selected for discussion manipulate this generic tradition to articulate ideas of community under specific historical and political circumstances. This study makes a substantial contribution to the rapidly growing field of early modern letters, and demonstrates how the field impacts our understanding of political discourses in circulation between 1580 and 1664, early modern women's writing, print culture and rhetoric.