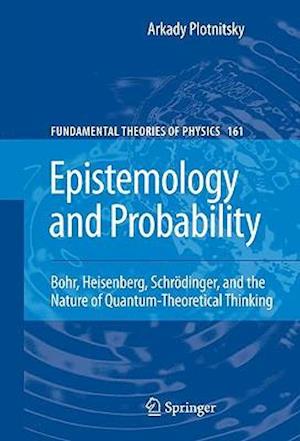 This book offers an exploration of the relationships between epistemology and probability in the work of Niels Bohr, Werner Heisenberg, and Erwin Schro- dinger, and in quantum mechanics and in modern physics as a whole. It also considers the implications of these relationships and of quantum theory itself for our understanding of the nature of human thinking and knowledge in general, or the ''epistemological lesson of quantum mechanics,'' as Bohr liked 1 to say. These implications are radical and controversial. While they have been seen as scientifically productive and intellectually liberating to some, Bohr and Heisenberg among them, they have been troublesome to many others, such as Schro dinger and, most prominently, Albert Einstein. Einstein famously refused to believe that God would resort to playing dice or rather to playing with nature in the way quantum mechanics appeared to suggest, which is indeed quite different from playing dice. According to his later (sometime around 1953) remark, a lesser known or commented upon but arguably more important one: ''That the Lord should play [dice], all right; but that He should gamble according to definite rules [i. e. , according to the rules of quantum mechanics, rather than 2 by merely throwing dice], that is beyond me. '' Although Einstein's invocation of God is taken literally sometimes, he was not talking about God but about the way nature works. Bohr's reply on an earlier occasion to Einstein's question 1 Cf.