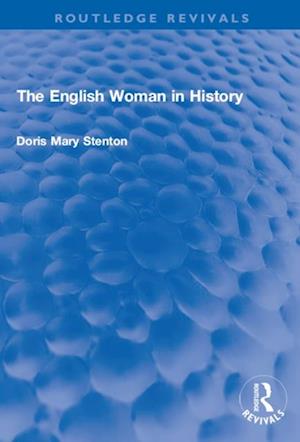 First published in 1957, The English Woman in History displays the place women have held and the influence they have exerted within the changing pattern of English society. Ever since the days of Queen Elizabeth I the position of women in English society has been a matter of general debate. In the seventeenth century many men produced books in praise of women, following the example of Thomas Heywood. Most of these books were devoted to the praises of individual women, but their authors generally produced arguments against subjection of all women to the unthinking dominance of men. While married women were still legally subject to their husbands and no women were allowed to take part in public affairs it was impossible to write objectively about women's place in the world. The women who at the end of the seventeenth century began to write were generally fired by a sense of injustice, and men tended to write condescendingly of charm and beauty, which interested them more than intelligence and wit. Now that women are bearing public responsibilities with success it is possible for historians to look back dispassionately over the centuries and trace the stages by which this position has been won. It is a survey of this nature which Lady Stenton has attempted in this book. This is a must read for students and scholars of women's history, gender studies and women's movement.