English Radicalism in the Twentieth Century 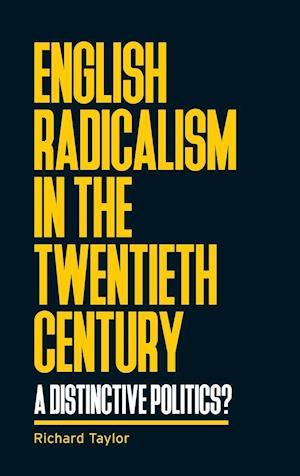 England has had a predominantly conservative political culture for some centuries. Yet there is a persistent, minority strand of radicalism that has challenged the practices, beliefs and structures of power of the established order. This book explores this 'radical tradition' as articulated in the twentieth century. The main currents of English radicalism range from liberal reformers, through socialist parliamentarians, to social movement activists in the peace, women's and labour movements. Despite their differing agendas, all have held in common their moral and political commitments to achieving a free, democratic, equal and just society. Moreover, all have believed, whatever their other differences, in the importance of extra-parliamentary social movements. What is it that has constituted this 'radical tradition'? Is it a coherent, distinctive and important political force in the twentieth century? And how do these ideas and practices relate to radical politics in England in the early twenty-first century?This book offers an analysis of the historical and ideological development of English radicalism from the English Civil War onwards. Richard Taylor examines how the problems of achieving radical change in England in the twentieth century were approached by ten key figures from a range of ideological positions within the tradition: Bertrand Russell, Sylvia Pankhurst, Ellen Wilkinson, George Orwell, E.P. Thompson, Michael Foot, Joan Maynard, Stuart Hall, Tony Benn and Nicolas Walter. -- .