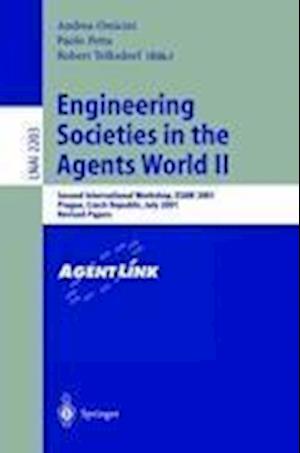 The idea to initiate a series of workshops to be entitled "Engineering Societies in the Agent's World" (ESAW) originated in late 1999, among members of the working group on Communication, Coordination, and Collaboration of the Intelligent Informa tion Agents special interest group of AgentLink, the European Network of Excellence for Agent Based Computing. By that time, the convergenceof scienti?c and technolog ical progress in numerous areas, including software engineering, distributed problem solving, knowledge based systems, and dynamic pervasive networking had gained sig ni?cant momentum. As a result, the reality of multiagent systems was now a given. In the eyes of the proposers and supporters of ESAW, these developments led to a new and manifest need, that was being left all but uncovered by the existing range of conferences and meetings. A platform that would overcome the disparate roots of the multiagent systems ?eld by placing a clear focus on an integrative level of anal ysis, namely: arti?cial societies populating a world encompassing the natural and the arti?cial, comprising autonomousentities and their environment.