Enfield in the Great War

indgår i serie Your Towns Cities in the Great War 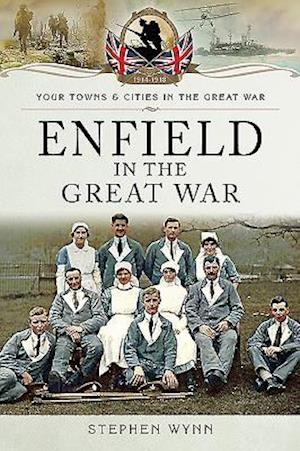 The Royal Small Arms Factory in Enfield was famous for producing the Lee Enfield .303 Rifle, the standard issued rifle provided to all infantry soldiers in the British Army during the course of the First World War. Indeed, the factory was so prestigious that King George V visited it in April 1915, and by the end of the war it had produced more than 2 million rifles, with some 6000 per week being produced at its peak. All of this achieved by a workforce of more than 9000.On Saturday, 7 July 1917 an air raid took place over Enfield that involved a large number of German Gotha aircraft. They were met by local anti-aircraft batteries, who did their best to thwart the Germans' attack. Sadly, the raid resulted in the death of local resident, Edith Halse, the sister-in-law of Lieutenant-Colonel Halse, who was stood in the front garden of her home, watching the German aircraft over head. She was actually killed by falling shrapnel from British anti-aircraft gun fire and became the only resident of Enfield to be killed in the town throughout the course of the war. A young boy who had been standing nearby was also stuck by some of the falling shrapnel, and had his wounds treated in hospital. The day after the incident, members of the Government Workers' Union, held a meeting in Enfield to complain about the lack of a warning about the air raid. In total contrast, July 1917 also saw a baker appear at Enfield Magistrates Court, charged under the Bread Order for selling loaves of bread that were over the permitted weight. For his heinous war time offence he was fined the princely sum of ten shillings.Enfield certainly played its part in the nation's war effort, with the guns that were produced in the town helping to play a big part in winning the war. A claim that could not be made by any other town in the country.