- Moving Housing and Urban Development Into the Mainstream of America's Future 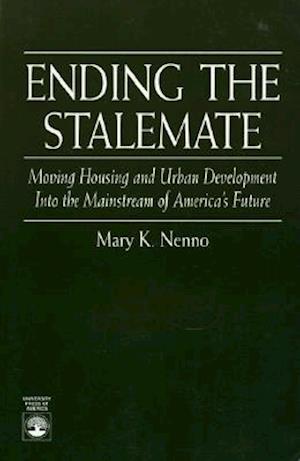 Ending the Stalemate assesses housing and urban development programs of the past 60 years, examines current urban conditions and interventions, and recommends steps that should be taken to link housing assistance, neighborhood renewal and urban development/redevelopment with the forces reshaping urban life. Mary K. Nenno has found that past housing and urban development efforts have been characterized by starts and stops, with significant action coming only in times of national crises such as economic depression or city disturbances. Comprehensive national initiatives to revitalize cities and declining metropolitan areas have been dormant for over two decades despite growing evidence of physical, economic, and human distress. Nenno finds hope for future progress in the opportunities provided by mainstream forces now at work in urban areas: the emergence of the 'urban region' as the base for joining cities and their outlying metropolitan areas in a new relationship; and the prospect of comprehensive improvement strategies based on partnerships between public, private, and citizen-based entities.