Empire, Politics and the Creation of the 1935 India Act

- Last Act of the Raj 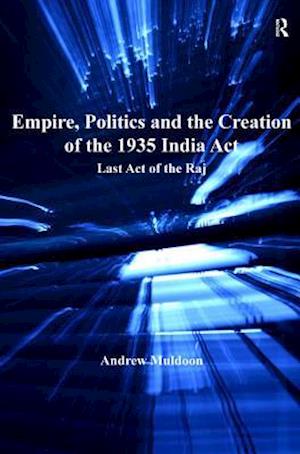 The 1935 Government of India Act was arguably the most significant turning point in the history of the British administration in India. The intent of the Act, a proposal for an Indian federation, was the continuation of British control of India, and the deflection of the challenge to the Raj posed by Gandhi, Nehru and the nationalist movement. This book seeks to understand why British administrators and politicians believed that such a strategy would work and what exactly underpinned their reasons. It is argued that British efforts to defuse and disrupt the activities of Indian nationalists in the interwar years were predicated on certain cultural beliefs about Indian political behaviour and capacity. However, this was not simply a case of 'Orientalist' policy-making. Faced with a complicated political situation, a staggering amount of information and a constant need to produce analysis, the officers of the Raj imposed their own cultural expectations upon events and evidence to render them comprehensible. Indians themselves played an often overlooked role in the formulation of this political intelligence, especially the relatively few Indians who maintained close ties to the colonial government such as T.B. Sapru and M.R. Jayakar. These men were not just mediators, as they have frequently been portrayed, but were in fact important tacticians whose activities further demonstrated the weaknesses of the colonial information economy. The author employs recently released archival material, including the Indian Political Intelligence records, to situate the 1935 Act in its multiple and overlapping contexts: internal British culture and politics; the imperial 'information order' in India; and the politics of Indian nationalism. This rich and nuanced study is essential reading for scholars working on British, Indian and imperial history.