Embeddings and Extensions in Analysis 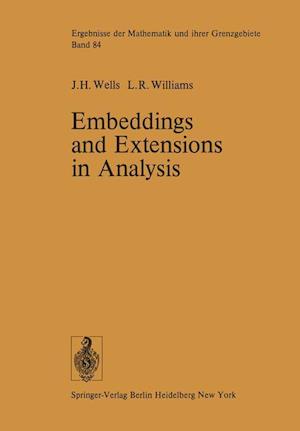 The object of this book is a presentation of the major results relating to two geometrically inspired problems in analysis. One is that of determining which metric spaces can be isometrically embedded in a Hilbert space or, more generally, P in an L space; the other asks for conditions on a pair of metric spaces which will ensure that every contraction or every Lipschitz-Holder map from a subset of X into Y is extendable to a map of the same type from X into Y. The initial work on isometric embedding was begun by K. Menger [1928] with his metric investigations of Euclidean geometries and continued, in its analytical formulation, by I. J. Schoenberg [1935] in a series of papers of classical elegance. The problem of extending Lipschitz-Holder and contraction maps was first treated by E. J. McShane and M. D. Kirszbraun [1934]. Following a period of relative inactivity, attention was again drawn to these two problems by G. Minty's work on non-linear monotone operators in Hilbert space [1962]; by S. Schonbeck's fundamental work in characterizing those pairs (X,Y) of Banach spaces for which extension of contractions is always possible [1966]; and by the generalization of many of Schoenberg's embedding theorems to the P setting of L spaces by Bretagnolle, Dachuna Castelle and Krivine [1966].