indgår i serie Handbook of Geochemistry 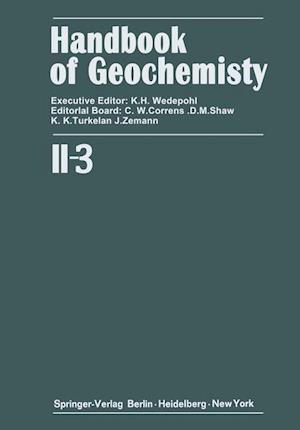 The literature on the geochemistry of gallium is very extensive and several problems arise in an attempt to summarise the available information in a short account. Only a small proportion of the many determinations of gallium in rocks and minerals has been made by the most precise and accurate procedures, and ana lyses by emission spectrographic methods constitute a dominant part of the data given here. In Table 31-1 are summarised the results of determinations of gallium in two standard rocks by various procedures. These results show that the generally less precise spectrographic procedures give, on average, values of adequate accuracy. In view of this and also the quite low dispersion of gallium in common rocks and minerals, the average results of the less precise analyses often constitute abundance data of reasonable quality. Individual determinations or whole series of determina tions by these methods are sometimes inaccurate, however, and it remains difficult to assess questions such as the extent to which differences in concentrations recorded for various areas represent genuine regional variations as distinct from systematic analytical errors. Furthermore, the low dispersion of gallium leads to an interest in relatively small variations in processes such as magmatic differentiation, and these variations tend to be obscured in many investigations through the use of imprecise methods.