- The Volatile Voter in a Turbulent World 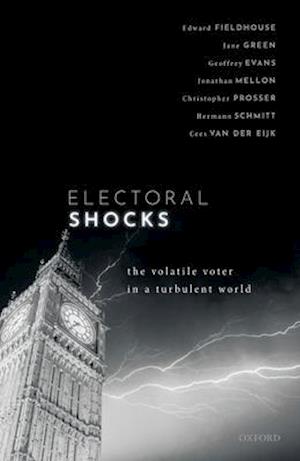 Electoral Shocks: The Volatile Voter in a Turbulent World offers a novel perspective on British elections, focusing on the role of electoral shocks in the context of increasing electoral volatility. It demonstrates and explains the long-term trend in volatility, how shocks have contributed to the level of electoral volatility, and also which parties have benefited from the ensuing volatility. It follows in the tradition of British Election Study books, providing a comprehensive account of specific election outcomes- the General Elections of 2015 and 2017-and a more general and novel approach to understanding electoral change. The authors examine five electoral shocks that affected the elections of 2015 and 2017: the rise in immigration after 2004, particularly from Eastern Europe; the Global Financial Crisis prior to 2010; the coalition government of the Conservatives and the Liberal Democrats between 2010 and 2015; the Scottish Independence Referendum in 2014; and the European Union Referendum in 2016. The focus on electoral shocks offers an overarching explanation for the volatility in British elections, alongside the long-term trends that have led to this point. It offers a way to understand the rise and fall of the UK Independence Party (UKIP), Labour's disappointing 2015 performance and its later unexpected gains, the collapse in support for the Liberal Democrats, the dramatic gains of the Scottish National Party (SNP) in 2015, and the continuing period of tumultuous politics that has followed the EU referendum and the General Election of 2017. It provides a new way of understanding electoral choice in Britain, and also beyond, and a better understanding of the outcomes of recent elections.