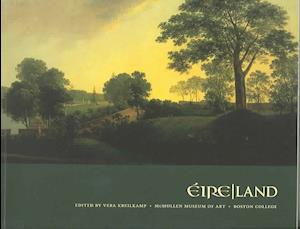 From its earliest history, Ireland has been contested land, claimed by waves of invaders, each attempting to inscribe and possess the island territory. "Eire/Land", to be held at the McMullen Museum from February to May 2003. Is the first major art exhibition to examine this theme. From mediaeval topographical surveys and Celtic artifacts to 19th-century landscapes and the expressionist art of the presnt day, "Eire/Land" displays pieces that collectively reveal Ireland's contested past -including the first illustrated manuscript of Gerald of Wales' "Topographia Hibernica" as well as works by George Petrie, James Arthur O'Connor, Sean Keating and architect Brian Tolle. Drawing on original research by prominent international scholars and by the largest and most distinguished Irish studies faculty in North America, this book of 16 essays relates those works and artifacts to new scholarship in a variety of disciplines, lending Ireland's visual history the cultural, historical and political context it deserves.

Forfattere
Bibliotekernes beskrivelse Catalog published in conjunction with the exhibition aEire/Land held at the McMullen Museum of Art, Feb. 2-May 19, 2003.