Egils Saga: the Story of Egil Skallagrimsson: an Icelandic Classic

- The Story of Egil Skallagrimsson: An Icelandic Classic 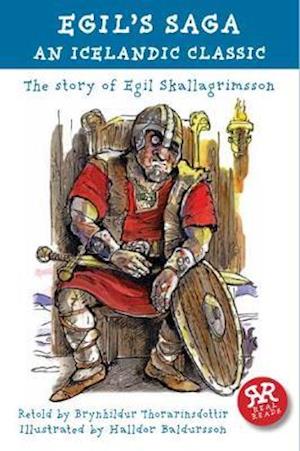 Is it really possible to become famous throughout your country and beyond both as a fearless warrior and as a renowned poet? Egil Skallagrimsson lived in Iceland a thousand years ago, and this is the story of his long and violent life. He could compose beautiful poetry, but he was also capable of staggering brutality. Can Egil successfully avenge his father's exile from Norway, defend his honor against the Norwegian King Erik Bloodaxe, and support the English King Athelstan in his battles against the Scots? When his travels finally find him at home again in Iceland, how will Egil feel about his family-his loving wife Asgerd, the brother he lost in battle, and his dead sons? And what will he do with his two chests of silver? Real Reads are accessible texts designed to support the literacy development of primary and lower secondary age children while introducing them to the riches of our international literary heritage. Each book is a retelling of a work of great literature from one of the world's greatest cultures, fitted into a 64-page book, making classic stories, dramas and histories available to intelligent young readers as a bridge to the full texts, to language students wanting access to other cultures, and to adult readers who are unlikely ever to read the original versions.

Forfattere
Bibliotekernes beskrivelse From youthful savagery to mature wisdom, an epic struggle in the defence of honour, in a running feud with the Norwegian king Erik Bloodaxe, for the English king Athelstan in his battles against Scotland.