- An Exploration, from New Zealand to the Sargasso, of the World's Most Mysterious Fish 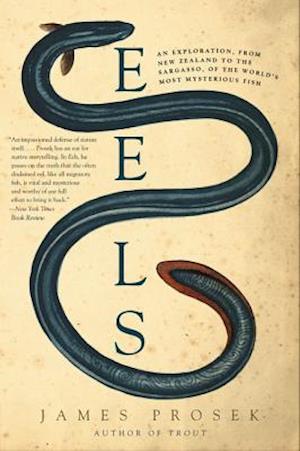 "This is a delightful work with the urgency of a good detective story." --Thomas McGuane

"I loved it A beautiful adventure story of one of the most wide-spread and least-known but ecologically important fish." --Bernd Heinrich, author of Summer World

Famous for his deeply informed, compulsively readable books on trout, writer-painter James Prosek (whom the New York Times has called "the Audubon of the fishing world") takes on nature's quirkiest and most enigmatic fish: the eel. Fans of Mark Kurlansky's Cod and The Big Oyster or Trevor Corson's The Secret Life of Lobsters will love Prosek's probing exploration of the hidden deep-water dwellers. With characteristically captivating prose and lavish illustrations, Prosek demystifies the eel's unique biology and bizarre mating routines, and illuminates the animal's varied roles in the folklore, cuisine, and commerce of a variety of cultures.

They spawn in the middle of the ocean but spend their adult lives in freshwater. They can overcome seemingly insurmountable obstacles and even cross over land. They are revered as guardians and monster-seducers by New Zealand's Maori, yet are often viewed with disgust in the West. They are a multibillion-dollar business in the Asian food market. They are often mistaken for snakes. They are eels--one of the world's most amazing and least understood fish. (Yes, fish.)

James Prosek offers a fascinating tour through the life history and cultural associations of the freshwater eel, exploring its biology, its myth and lore, its mystery and beauty. Eels is a mesmerizing biography of an intriguing and mysterious creature, as well as a telling look at humanity, the will to persist, and the ever-changing relationship between man and the natural world.