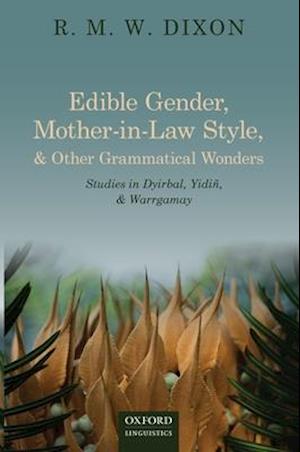 This book builds on R. M. W. Dixon's most influential work on the indigenous languages of Australia over the past forty years, from his trailblazing grammar of Dyirbal published in 1972 to later grammars of Yidi� (1971) and Warrgamay (1981). Edible Gender, Mother-in-Law Style, and Other Grammatical Wonders includes further studies on these languages, and the interrelations between them. Following an account of the anthropological and linguistic background, Part I provides a thorough examination of, and comparison between, the gender system in Dyirbal (one of whose members refers to 'edible vegetables') and the set of nominal classifiers in Yidi�. The chapters in Part II describe Dyirbal's unusual kinship system and the 'mother-in-law' language style, and examines the origins of 'mother-in-law' vocabulary in Dyirbal and in Yidi�. There are four grammatical studies in Part III, dealing with syntactic orientation, serial verb constructions, complementation strategies, and grammatical reanalysis. Part IV covers grammatical and lexical variation across the dialects of Dyirbal, compensatory phonological changes, and a study of language contact across the Cairns rainforest region. The two final chapters, in Part V, recount the sad stories of how the Yidi� and Dyirbal languages slowly slipped into oblivion.

Forfattere
Bibliotekernes beskrivelse This book builds on R. M. W. Dixon's most influential work on the languages of North Queensland. It brings together studies in the fields of phonology, syntax, language contact, and language attrition, illustrated with examples of the unusual and theoretically significant features of the languages studied.