Economics and its Discontents 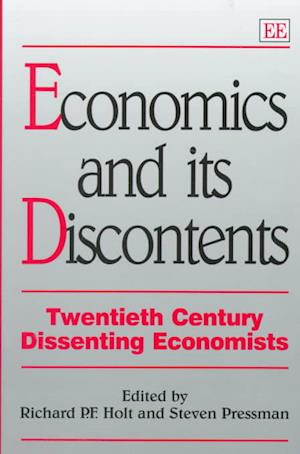 Dissenters have a common dissatisfaction with economics as it is currently practised, and they recognise that twentieth century economics has failed to explain real world economic phenomena. This major book focuses on the work and lives of seventeen of the most influential dissenting economists who have shaped twentieth century economics and who continue to make economics more relevant.In Economics and its Discontents each chapter explains what it means to be a dissenting economist and examines how and why the work of the featured economist constitutes dissent. It demonstrates that dissent in the profession extends beyond ideology and that dissenters can come from radical, liberal or conservative backgrounds. Dissent is considered in many respects, including how economics is taught, the methodology of economic analysis, the lack of attention economists pay to the real world behaviour of individuals, the narrow and limited assumptions made by economists, the inappropriate attempt of economics to dominate all social sciences, and the policy conclusions reached by standard economic analysis. The dissenters featured in this book suggest that there is a better way to do economics, and a better way to be an economist, and each has helped keep economics honest by constantly questioning traditional thinking. This book salutes and celebrates these dissenters who exemplify the very best of the discipline. If economics is again to be a respected field and a highly regarded profession, we must look to these dissenters to point the way forward.This book will be welcomed by professional economists, researchers and postgraduate students, especially those interested in the history of economic thought, and economic methodology and philosophy.

Forfattere
Bibliotekernes beskrivelse Dissenters have a common dissatisfaction with economics as it is currently practised, and they recognise that twentieth century economics has failed to explain real world economic phenomena.