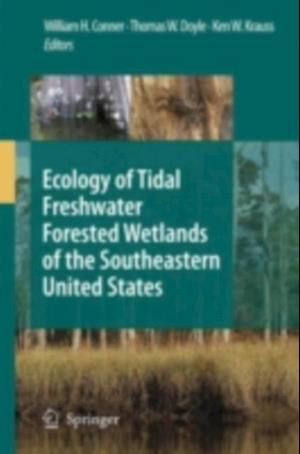 Tidal freshwater forested wetlands represent an intriguing and und- studied type of ecosystem in the southeastern United States. The phy- ographic position of tidal freshwater forested wetlands in occupying low lying, coastal areas makes them susceptible to upland runoff, tidal flo- ing, saltwater intrusion, and other global climate change phenomena. While information on them is rather sparse in the scientific literature, these ecosystems are among the most sensitive to sea-level rise and increased drought or flood frequency. Tidal freshwater forested wetlands are readily impacted by acute and chronic exposure to even low levels of salinity. The combined stress of flooding and salinity may compound the threat in these systems such that the margin for survival and compensation to changing climate is much less than for other coastal habitats. In this book, we bring together principal investigators whose research focus has targeted the - drology, biogeochemistry, community ecology, forestry, stress physiology, and restoration of tidal freshwater forested wetlands in the southeastern United States. It is our foremost intent to develop an up-to-date treatise that includes not only peer-reviewed journal articles but also the dispersive grey literature on the topic in order to spark future research interest in tidal freshwater forested wetlands and to provide land managers with a concise overview of research findings. We have thus formalized all scientific and common names into the standard of ITIS (Integrated Taxonomic Infor- tion System, http://www. itis.