Echoes of the Coventry Blitz

indgår i serie Echoes of the Blitz 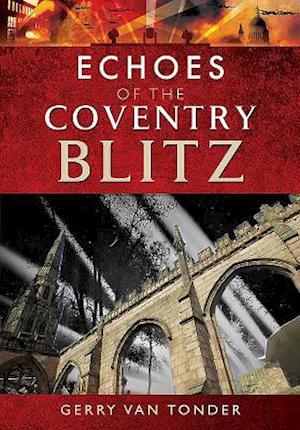 Smoke rises in the City of Three Spires, the smouldering remnant of the Nazi hate. Coventry and England will remember and repay'.From August 1940, Hitler's Luftwaffe mercilessly and indiscriminately bombed cities and towns in Britain. The historic West Midlands city of Coventry did not escape the carnage as, night after night, high-explosive and incendiary bombs rained down on the hapless production centre of cars, munitions and aero engines.Today, the iconic shell of Coventry's once majestic medieval cathedral offers a silent memorial of remembrance to that dreadful night. For the city's residents of now, it is a poignant echo of a violent and destructive part of their history.With carefully selected photographs, Gerry van Tonder tells the story of Coventry's blitz through a series of 'ghost' photographs, where historic wartime images are blended with their modern counterpart to create a fascinating window in to Coventry's past. Also drawing from contemporary press accounts of the Coventry Blitz, this book presents a totally unique comparative insight into the Nazi bombing of Coventry in the Second World War.

Forfattere
Bibliotekernes beskrivelse An entirely new way of viewing the wartime damage to the city-blending the modern and wartime image in one shot. 200 illustrations