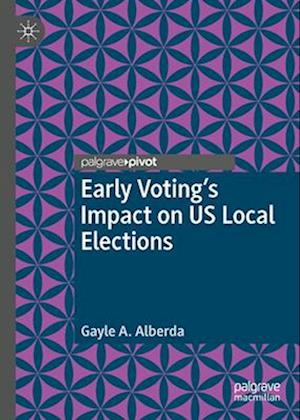 Voter turnout in local elections is paradoxical. It is where government is closest to those governed and where many first become politically active; yet, it is also where political participation in the form of voting is the lowest. If high participation is an indicator of a healthy democracy, then what can be done to increase participation at the local level? Early voting has long been perceived to increase voter turnout, and there is evidence to suggest that early voting does have an impact on turnout. A majority of early voting scholarship, however, focuses on turnout at the national or state level. What is not clear is how early voting influences turnout at the local level. In the wake of partisan controversy surrounding early voting policies and the reduction of early voting periods in many states, it is important to understand the impact of such policies on all types of elections. Localities are the bedrock of American democracy. Understanding what factors could increase turnout at the local level-where it is devastatingly low-provides valuable insight on local participation, election administration, and early voting laws for scholars and decision-makers alike.

Forfattere
Bibliotekernes beskrivelse Early voting has long been perceived to increase voter turnout, and there is evidence to suggest that early voting does have an impact on turnout. 1 Hardback 10 Illustrations, black and white; X, 182 p. 10 illus.