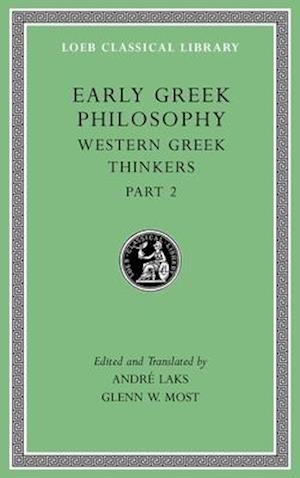 The fragments and testimonia of the early Greek philosophers (often labeled the Presocratics) have always been not only a fundamental source for understanding archaic Greek culture and ancient philosophy but also a perennially fresh resource that has stimulated Western thought until the present day. This new systematic conception and presentation of the evidence differs in three ways from Hermann Diels's groundbreaking work, as well as from later editions: it renders explicit the material's thematic organization; it includes a selection from such related bodies of evidence as archaic poetry, classical drama, and the Hippocratic corpus; and it presents an overview of the reception of these thinkers until the end of antiquity. Volume I contains introductory and reference materials essential for using all other parts of the edition. Volumes II?III include chapters on ancient doxography, background, and the Ionians from Pherecydes to Heraclitus. Volumes IV?V present western Greek thinkers from the Pythagoreans to Hippo. Volumes VI?VII comprise later philosophical systems and their aftermath in the fifth and early fourth centuries. Volumes VIII?IX present fifth-century reflections on language, rhetoric, ethics, and politics (the so-called sophists and Socrates) and conclude with an appendix on philosophy and philosophers in Greek drama.