Duncane Laideus Testament and other Comic Poems in Older Scots 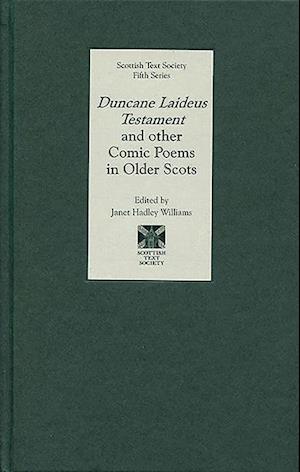 This volume contains eleven Scottish examples of particular kinds of humorous writing - comic, parodic, and satiric - of the late fifteenth and sixteenth centuries. Previously unavailable in modern scholarly editions, these works are freshly established from diverse sources, including the manuscript that is the earliest extant of John Knox's "Historie of the Reformatioun of Religioun". A manuscript owned by the Campbell of Glenorchy family is the source of the volume's most substantial work, Duncane Laideus Testament; the poem's bicultural outlook provides an important reference point for historians, as well as scholars of early Scottish and Gaelic literature. Other texts include David Lyndsay's The Complaint of Bagsche and the anonymous "My gudame wes a gay wif". To assist study of the development of early Scottish writing, and to chart historical, especially religious, change, the poems are arranged in their probable order of composition. Each is introduced separately, with consideration of witnesses; evidence for date of composition and authorship; title, metre, and genre; and full apparatus. Explanatory notes examine matters of interest or potential difficulty, including the sense of contemporary expressions, wordplay, legal and Latin terms, and debts to earlier writers.The volume also includes a full Bibliography, Glossary, and Index of Names and Places. Dr Janet Hadley Williams is Honorary Visiting Fellow, School of Literature, Languages, and Linguistics, College of Arts and Social Sciences, The Australian National University.