- The Cult of Honor in Fin-de-Siecle Germany 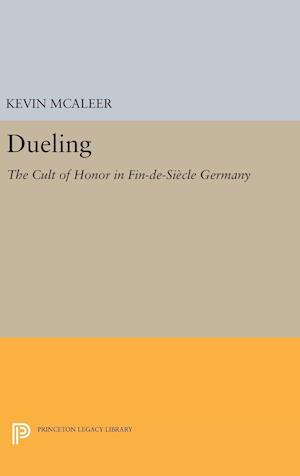 The question of what it takes "to be a man" comes under scrutiny in this sharp, often playful, cultural critique of the German duel--the deadliest type of one-on-one combat in fin-de-siecle Europe. At a time when dueling was generally restricted to swords or had been abolished altogether in other nations, the custom of fighting to the death with pistols flourished among Germany's upper-class males, who took perverse comfort in defying their country's weakly enforced laws. From initial provocation to final death agony, Kevin McAleer describes with ironic humor the complex protocol of the German duel, inviting his reader into the disturbing mindset of its practitioners and the society that valued this socially important but ultimately absurd pastime. Through a narrative that cannot restrain itself from poking fun at the egos and prejudices that come to the fore in the pursuit of "manliness," McAleer offers both an entertaining and thought-provoking portrait of a cultural phenomenon that had far-reaching effects.The author employs a wealth of anecdotes to re-create the dueling event in all its variety, from the level of insult--which could range from loudly ridiculing a man's choice of entree in an upscale restaurant to, more commonly, bedding his wife--to such intricacies as the time and place of the duel, the guest list, the selection of weapons and number of paces, dress options, and the decision regarding when to let the attending physician set up his instruments on the field. As he exposes the reader to the fierce mentality behind these proceedings, McAleer describes the duel as a litmus test of courage, the masculine apotheosis, which led its male practitioners to lay claim to both psychic and legal entitlements in Wilhelmine society. The aristocratic nature of the duel, with its feudal ethos of chivalry, gave its upper-middle-class practitioners even more opportunity to distinguish themselves from the underclasses and other marginalized groups--such as Socialists, Jews, left-liberals, Catholics, and pacifists, who, for various reasons, were stigmatized as incapable of "giving satisfaction."The duel, according to McAleer, was thus a social mirror, and the dueling issue political dynamite. Throughout these accounts, the author sustains a personal voice to convey the horror and fascination of what at first appears to be simply a curious fringe activity, but which he goes on to reveal as an integral element of German society's consciousness in the late nineteenth century. In so doing, he strengthens the argument that Germany followed a path of development separate from the rest of Europe, leading to World War I and ultimately to Hitler and the Nazis. Originally published in 1994. The Princeton Legacy Library uses the latest print-on-demand technology to again make available previously out-of-print books from the distinguished backlist of Princeton University Press. These editions preserve the original texts of these important books while presenting them in durable paperback and hardcover editions. The goal of the Princeton Legacy Library is to vastly increase access to the rich scholarly heritage found in the thousands of books published by Princeton University Press since its founding in 1905.