- Translation with Introduction and Notes 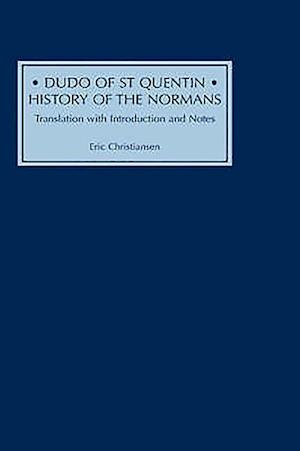 This is the first English translation of a powerful work of semi-imaginary history which gave the Normans a past, present, and future at the outset of their triumphant century. Completed in or soon after 1015 by a visiting French scholar, it is a study in verse and prose of one family's rise from defeat and exile in the world of the heathen Vikings to an honoured place among the great territorial rulers of France. It recounts two campaigns in England by the founder, Rollo, and a series of stirring political, military and religious events on the Continent, most notably the dreadful murder of Rollo's son William, and the kidnapping, escape and precarious early career of Dudo's first patron, Count Richard I. The author's exuberant imagination is matched by his language, so presenting the unwary reader with difficulties, which ERIC CHRISTIANSEN notes and discusses throughout, defining and explaining the many poetic metres and prose embellishments used, and identifying the sources of numerous borrowings; he also re-examines and collates the manuscripts and printed versions of the text, and considers the most recent scholarship in the field. The late ERIC CHRISTIANSEN was Fellow of New College and University Lecturer at Oxford.

Forfattere
Bibliotekernes beskrivelse First English translation of key chronicle for study of the rise of the Normans.