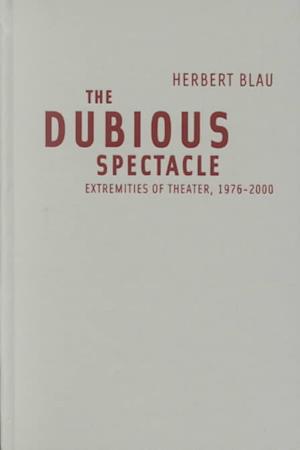 Spanning a quarter of a century, the essays in this book rehearse, in the movement of memory and cross-reflection, an extensive career in theater. The work of Herbert Blau-his directing, writing, and criticism-has been a determining force during this period as theater encounters theory.Blau's struggle to bring a critical intelligence to the American stage goes back half a century, to the quiescent postwar years (which he has eloquently described in The Impossible Theater: A Manifesto). His innovations in performance began with early productions of now-canonical plays that were hardly known at that time (works by Brecht, Beckett, Genet, Pinter, Duerrenmatt, and others). His experience is as distinctive as his versatile habits of mind and conceptual urgency of style.If the impossible takes a little time (as the title of one essay states), Blau's struggle now continues in a theoretical vein. Performance-and his own compelling writing- has moved across other genres and disciplines into fashion, politics, sexuality, and theory. His diversity of thought is demonstrated here in commentaries about the newer modes of performance (including conceptual and body art), various American playwrights, Renaissance drama, new music and theater, voice, the senses and the baroque, and the photographic image. As the essays reflect upon each other, a kind of cultural history, with inflections of autobiography, develops-which is what readers of Blau's previous books have come to expect.