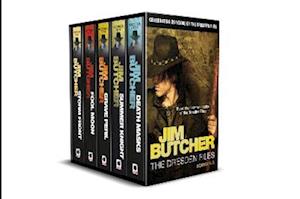 To celebrate the 20th anniversary of Storm Front's release, this box set brings together the first five novels in Jim Butcher's No. 1 Sunday Times and No. 1 New York Times bestselling Dresden Files.Meet Harry Dresden, Chicago's first (and only) Wizard P.I.Turns out the 'everyday' world is full of strange and magical things - and most of them don't play well with humans. That's where Harry comes in.This beautifully presented box set is the perfect gift for fans of perfect for fans of action-packed fantasy fiction by authors such as Ben Aaronovitch, Brandon Sanderson and Joe Abercrombie.STORM FRONT Harry's business as a private investigator has been quiet lately - so when the police bring him in to consult on a grisly double murder committed with black magic, he's seeing dollar signs. But where there's black magic, there's a black mage behind it. And now that mage knows Harry's name.FOOL MOONYou would think Chicago would have a little more action for the only professional wizard in the phone book. But lately, Harry hasn't been able to dredge up any kind of work - magical or mundane. But just when it looks like he can't afford his next meal, a murder comes along that requires his particular brand of supernatural expertise.GRAVE PERILHarry has faced some terrifying foes during his career. Giant scorpions. Oversexed vampires. Psychotic werewolves. It comes with the territory when you're the only wizard in town. But in all Harry's years of supernatural sleuthing, he's never faced anything like this.SUMMER KNIGHTSince his girlfriend left town to deal with her newly acquired taste for blood, Harry's been down and out. He can't pay his rent. He's alienating his friends. He can't recall his last shower. Then when things are at their worst, the Winter Queen of Faerie saunters in with an offer Harry can't refuse.DEATH MASKSHarry Dresden should be happy that business is good - makes a change. But now he's getting more than he bargained for: a duel with the Red Court of Vampires' champion, who must kill Harry to end the war between vampires and wizards; professional hit men using Harry for target practice; the missing Shroud of Turin (less missing than expected) and a headless corpse the Chicago police need identifying . . .'The Dresden files is my favourite series ever. I say that both as a writer and a reader . . . I don't make statements like that casually' Patrick Rothfuss, author of The Name of the Wind'Butcher's storytelling is satisfying on a level that's bone-deep' io9'Harry Dresden has a vitality that few urban fantasy heroes can match' SFX'The Dresden Files are addictive page-turners' SciFiNow