Doug Buffone: Monster of the Midway

- My 50 Years with the Chicago Bears 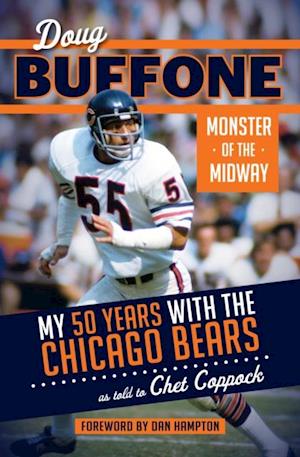 A beloved Bear's tales of the epic highs and frustrating lows of the team over the last half century In Doug Buffone: Monster of the Midway , author and former Bear Doug Buffone provides a behind-the-scenes look at the personalities and events that have shaped the franchise's storied history. Beginning in 1966, when Buffone was selected in the fourth round by the Bears, the book details his early playing days under legendary Coach George Halas all the way through the start of the new era of the franchise with John Fox. He takes readers through the exhilaration of being teammates with the legendary Gale Sayers, as well as the heartrending experience of losing teammate Brian Piccolo to cancer, which would go on to inspire the award-winning movie Brian's Song . Before retiring as the last Bear to have played under Halas in 1980, Buffone also had the pleasure of sharing the locker room with the next superstar Bears running back, Walter Payton, helping lay the groundwork that would lead to the unforgettable 1985 Super Bowl champion squad. Luckily, even after his playing days, Buffone never strayed far from the Bears organization, covering the team on television and radio for more than three decades. From the greatness of Dick Butkus, Mike Ditka, Brian Urlacher, and Matt Forte to the debacles of Rashaan Salaam, Dave McGinnis, and Mark Trestman, Buffone has seen it all, and this book gives fans a taste of what it's like to be a part of the Bears storied history.