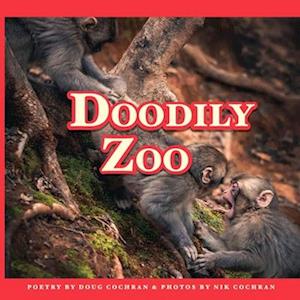 Doodily Zoo is fun for you.

Doodily Zoo is a father-son endeavor, conceived of by Doug Cochran to showcase the wonderful animal photography of his adult son, Nik. The book was designed for sharing with Doug's one year old granddaughters, combining poetry with the animal images from Nik, in an alphabet book format. It is all about the read-to experience, the love of words and images all wrapped up in cozy times together.

There were some challenges, for example, not all the alphabet letters were represented in images when the book was conceived. Doug refused to fly Nik to Africa for Zebra photos so there is a bit of 'cheating' on the photo-alphabet letters, but it is all in fun. Doug had the poem about the ladybug which he wanted to keep:

Once there was a Ladybug

More bug than she was lady

She ate her weight in tender leaves

And tended to her babies

When the poem was written he never thought it would be a challenge for Nik to get a ladybug photo. But.......well, ladybug season was a long way off and with the California wildfires it was not possible to order ladybugs from garden shops (ladybugs control aphids). Then one day, Doug stopped to talk with a friend on a busy street and a ladybug landed on his shoulder. He quickly cupped it in his hand, ran home desperately calling his son Nik, who rushed there with his camera and the last photo for the book had landed.

The book is meant to be read with a young child on your lap, or with a small circle of kids listening in. Hopefully, after a few reads the little ones can join in, with the readers reciting the poems and there should be lots-and-lots of talk about the photos.......and nature.......and the amazing world around us.

If you like Doodily Zoo, Doug has written a beautifully illustrated book about a young boy developing empathy as he takes responsibility for a vulnerable animal. This book, for children a little older, is called The Hyrax in the Mogogos, available from the author at dclaw1@telus.net or from Amazon books.