Do You Want It Bad Enough? 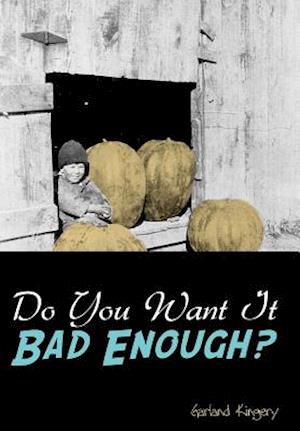 At a gathering on December 7, 2010, I mentioned that I was old enough to remember the Pear Harbor attack. One of the college students present commented "that was so yesterday." It also transpired that the student was not at all clear about what had happened on that day. The episode revealed to me how the memory of World War II and the times leading up to it were receding from the national consciousness. Yet that conflict and the Depression preceding it formed the character of more than one generation of Americans. Garland Kingery is one of them. He was born at a time when America was a much more rural society than it is today. His memoir relates how his family and neighbors survived in the hard times of the "Dirty Thirties." After the entry of America into the war, Mr. Kingery went from plowing with horses to repairing airplane engines in just a few weeks. His wartime experiences were a central part of this fascinating memoir. After the war, he married and raised children, along with many other veterans. He had a lengthy distinguished career with the State of Illinois. Many interesting observations about Illinois politics and the workings of state government are included in Mr. Kingery's story. Currently, he is retired and resides in Chatham, Illinois. This Autobiography is an account of the history of most twentieth-century America written by an individual who contributed to that history. Those unfamiliar with the events recounted in this book would profit greatly by reading it. Those who would dismiss the experiences of Mr. Kingery and others with similar experiences should heed the admonition of George Santayana: "Those who forget the lessons of history are doomed to repeat it." It was an honor for me to have been associated with this project. Jan F. Branthaver