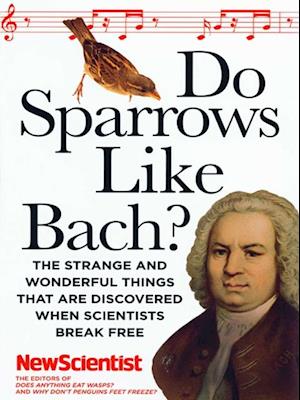 From the same editors that brought you Why Don't Penguins' Feet Freeze? and Does Anything Eat Wasps?, an exploration of the weird and wonderful margins of sciencethe latest volume in the brilliant New Scientist series.Science tells us grand things about the universe: how fast light travels, and why stones fall to earth. But scientific endeavor goes far beyond these obvious foundations. There are some fields we don`t often hear about because they are so specialized, or turn out to be dead ends. Yet researchers have given hallucinogenic drugs to blind people (seriously), tried to weigh the soul as it departs the body, and planned to blast a new Panama Canal with an atomic weapon. Real scientific breakthroughs sometimes come out of the most surprising and unpromising work. Do Sparrows Like Bach? is about the margins of scienceinvestigating everything from what it`s like to die to exploding pants and recycled urine. Who on earth would burn off their beard with a laser? Produce a fireproof umbrella that doubles as a parachute? Replace sniffer dogs with gerbils? Could a chemical component of flatulence be the next Viagra? Do sparrows (and even fish for that matter) prefer Bach to Led Zeppelin? The editors at New Scientist magazine have the answers to all these questions and more in this celebration of outrageous, outlandish, and brilliant discoveries on the fringes of scientific research. This extraordinary collection is an astonishing reminder that even at its most misguided, science is intensely creative, often hilarious, and can spark the imagination like nothing else.