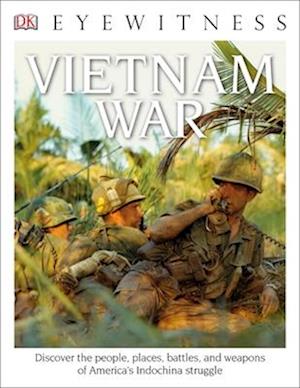 A visual and informative guide to one of the longest and most controversial wars in American history, now revised and updated in the relaunched DK Eyewitness Books format.

Explore the people, places, battles, and weapons of America's Indochina struggle with DK Eyewitness Books: Vietnam War. See campaigns in the air and battles in jungles, cities, and rice paddies, from Saigon to the Mekong Delta. Learn about the most powerful combat weapons of the age, including napalm bombs and M-60 machine guns. From the assassination of President John F. Kennedy to the Ho Chi Minh Trail to the Viet Cong to the war's aftermath, discover the Vietnam War, why America went to war in Indochina, and who fought there.

Series Overview: Each revised Eyewitness book retains the stunning artwork and photography from the groundbreaking original series, but the text has been reduced and reworked to speak more clearly to younger readers. Still on every colorful page: vibrant annotated photographs and the integrated text-and-pictures approach that makes Eyewitness a perennial favorite of parents, teachers, and school-age kids.