- Problems of Attention in Eighteenth-Century Literature 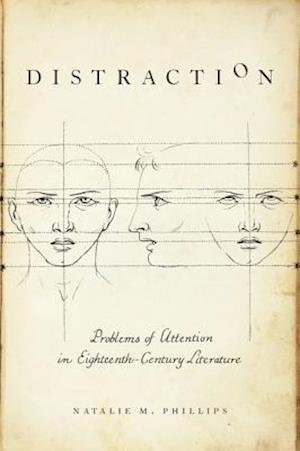 Early novel reading typically conjures images of rapt readers in quiet rooms, but commentators at the time described reading as a fraught activity, one occurring amidst a distracting cacophony that included sloshing chamber pots and wailing street vendors. Auditory distractions were compounded by literary ones as falling paper costs led to an explosion of print material, forcing prose fiction to compete with a dizzying array of essays, poems, sermons, and histories. In Distraction, Natalie M. Phillips argues that prominent Enlightenment authors-from Jane Austen and William Godwin to Eliza Haywood and Samuel Johnson-were deeply engaged with debates about the wandering mind, even if they were not equally concerned about the problem of distractibility. Phillips explains that some novelists in the 1700s-viewing distraction as a dangerous wandering from singular attention that could lead to sin or even madness-attempted to reform diverted readers.Johnson and Haywood, for example, worried that contemporary readers would only focus long enough to "look into the first pages" of essays and novels; Austen offered wry commentary on the issue through the creation of the daft Lydia Bennet, a character with an attention span so short she could listen only "half-a-minute." Other authors radically redefined distraction as an excellent quality of mind, aligning the multiplicity of divided focus with the spontaneous creation of new thought. Laurence Sterne's Tristram Shandy, for example, won audiences with its comically distracted narrator and uniquely digressive form. Using cognitive science as a framework to explore the intertwined history of mental states, philosophy, science, and literary forms, Phillips explains how arguments about the diverted mind made their way into the century's most celebrated literature. She also draws a direct link between the disparate theories of focus articulated in eighteenth-century literature and modern experiments in neuroscience, revealing that contemporary questions surrounding short attention spans are grounded in long conversations over the nature and limits of focus.

Forfattere
Bibliotekernes beskrivelse She draws a direct link between the disparate theories of focus articulated in eighteenth-century literature and modern experiments in neuroscience, revealing that contemporary questions surrounding short attention spans are grounded in long conversations over the nature and limits of focus. 17 Halftones, black and white; 7 Illustrations, color