- Identities and Loyalties on the South African Left 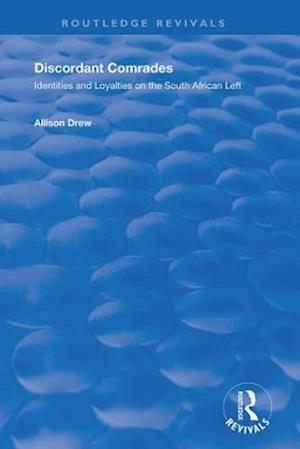 This title was first published in 2000: This book considers the fortunes of socialism in South Africa from the doctrine's arrival around 1900 to its legal suppression in 1950. Socialism's universal claims had to come to terms with South Africa's singular national experience in which a racial ideology and a racial division of the working class played a far greater role than in any other country. The left in South Africa had to deal with all the complexities of ideology and strategy that faced their counterparts in Europe and North America; but in South Africa it was further vexed by challenges of profound racial and national inequalities and a white labour movement which sought protection through racial segregation. Communism, rather than Social Democracy, prevailed; hence the reverberations of the splits in the Communist International were far more debilitating in South Africa than anywhere else. In the years after World War II African nationalism became the dominant influence on the South African left, chiefly through the relationship between the ANC and the Communist Party. Discordant Comrades draws on a wide range of primary sources from inside and outside South Africa, including the archives of the Communist International in Moscow. The result is a scholarly and challenging analysis of the South African left.