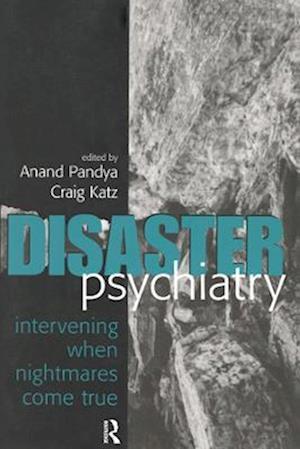 Disaster Psychiatry: Intervening When Nightmares Come True captures the state of disaster psychiatry in the aftermath of the terrorist attacks of September 11, 2001. This emergent psychiatric specialty, which is increasingly separated from trauma and grief psychiatry on one hand and military psychiatry on the other, provides psychotherapeutic assistance to victims during, and in the weeks and months following, major disasters. As such, disaster psychiatrists must operate in the widely varying locales in which natural and man-made disasters occur, and they must establish their role among the chaotic array of organizations involved in direct disaster response. Editors Anand Pandya and Craig Katz have captured the challenge and promise of disaster psychiatry through first-person narratives. We hear from psychiatrists who have encountered disasters at various stages of their career and in widely varying social, political, and personal contexts. Accounts of psychiatric involvement with adults and children during and after 9/11 have understandable pride of place in this collection. But they are balanced by richly informative narratives about other domestic and international disasters. Fraught with the drama attendant to the events they describe, these essays delineate the dizzying array of challenges that confront the disaster psychiatrist. They range from the intense emotional responses that are part of the aftermath of any disaster, to the need to legitimize a psychiatric presence within diverse cultural and medical contexts, to the subtle task of providing therapeutic boundaries at a time when all rules seem to be suspended. Special attention is given to the daunting task of working with children whose parents' are disaster victims. What emerges from these testimonies is compelling documentation of skilled and compassionate psychiatrists at the outer limits of their specialty, pursuing their calling into uncharted realms of therapeutic engagement.

Forfattere
Bibliotekernes beskrivelse This work aims to capture the state of disaster psychiatry in the aftermath of the terrorist attacks of September 11, 2001. This emergent psychiatric specialty provides psychotherapeutic assistance to victims during, and in the weeks and months following, major disasters.