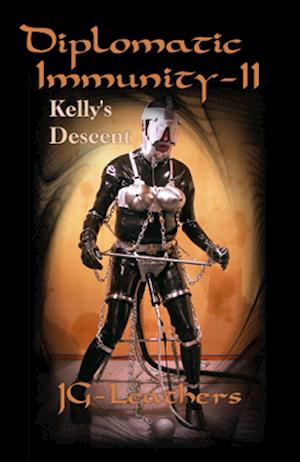 A one-of-a-kind novel by author JG Leathers... Airline agent, Kelly Hanson has the bad luck of being at the wrong place at the wrong time. He's called on to assist with a female passenger Delilah Mahjalis, a young woman completely shrouded in the dense black robes of a Middle Eastern society. Kelly quickly discovers that the girl cannot walk, due to a complex array of chains and other jewellery she has apparently been forced to wear. With his curiosity piqued, Kelly embarks on a misguided attempt to discover why Delilah was so brutally restrained. But when he makes inquiries about her at her country's embassy, his curiosity comes to the attention of the girl's father and powerful forces are unleashed of which Kelly has no comprehension or control. Suddenly, he finds himself abducted, forcefully restrained and in the midst of an unimaginable horror story, as the latest 'subject' of the ingenious Dr Jannason, who has perfected a unique system of bondage punishment. Kelly will be the doctor's first male subject. In a terrifying descent into total bondage and subjugation, Kelly not only duplicates Delilah's wretched misfortune, but he is eventually transformed into a vision of himself that defies description. Kelly becomes little more than a 'test animal' on a forced journey of sexual reassignment in the most horrific of circumstances. Once complete, he'll find himself shipped off to become a play thing, demonstrator, and discipline slave for Sheikh Al-Marish. There is no escape, for his journey has become a new, terrible, and permanent life. In a style all his own, JG-Leathers chronicles in Diplomatic Immunity, Part Two, an amazing physical transformation, which includes detailed accounts of forced bondage, hi-tech restraining devices, diabolical punishment, sexual torture and extreme body alterations, as well as several unique glimpses of the doctor's various restraining methods for his ever increasing number of female subjects. Cover Image by Rubbert