Diodoros of Sicily: Bibliotheke Historike: Volume 1, Books 14-15: The Greek World in the Fourth Century BC from the End of the Peloponnesian War to the Death of Artaxerxes II (Mnemon)

- Translation, with Introduction and Notes 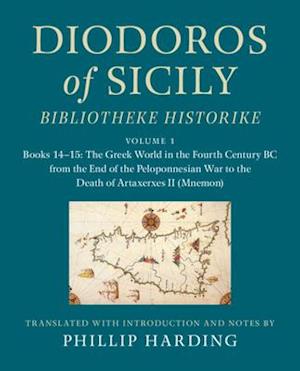 Diodoros of Sicily (c.90-c.30 BC) spent thirty years producing an encyclopedic compendium of world history from its mythical beginnings to his own day. His is the only surviving, connected account of Greek affairs from 480/79 to 302/1. The books translated in this volume cover the years from the end of the Peloponnesian War to the aftermath of the Battle of Mantineia in 362/1. These were crucial years in the struggle for supremacy in Greece amongst the Greek states, Sparta, Athens and Thebes, before they were overtaken by the unexpected rise of Macedon. Diodoros also provides the only extant account of the career of Dionysios I of Syracuse and the Cypriot war between Persia and Evagoras of Salamis. The translation is supported by extensive notes and the Introduction examines Diodoros' moral and educational purpose in writing, the plan of his work, his sources, and his qualities as a historian.

Forfattere
Bibliotekernes beskrivelse The first in a planned three-volume translation of books 14-20 of Diodoros of Sicily's Bibliotheke Historike, covering a crucial period of Greek history and providing an important competing source to Xenophon's Hellenika. Accompanied by extensive notes and a substantial Introduction to Diodoros and his work. Worked examples or Exercises