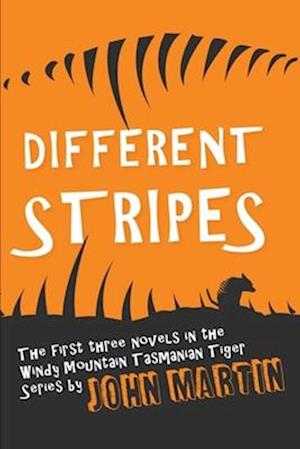 If the Tasmanian Tiger really is extinct, how come it won't go away in this bundle of three funny novels?

If you like finding a quirky character behind every corner, you are in danger of enjoying this collection.

You are in serious danger of enjoyment you like a dash of mystery with your laughs, and you don't mind twists you don't see coming.

The first book is Who Knew Tasmanian Tigers Eat Apples

This quirkiest-of-all the books is set in Tasmania in the early 1990s and takes a satirical dig at a small town and some small-minded officials.

The Tasmanian Tiger hunter tangles with a greedy mayor who believes no one can tell him what to do with an apple orchard that was handed down from his great, great, great grandfather, who was a tyrant who struck fear into the hearts of Irish convicts under his command.

When claims are made Tasmanian Tigers have been spotted in the orchard, the mayor doesn't believe a word of it.

The next novel, Lie of the Tiger is set in the same location 25 years later.

How could secret doggy business possibly solve the mystery of the Tasmanian Tiger?

Find out in this funny but touching story about two old men and an Irishman who are trying to save a failing Tasmanian Tiger museum.

Finally, Blokes on a Plane.

The Mayor is missing ... someone is stealing important landmarks ... and the Tasmanian Tiger starts being elusive once again.

Two old men go from being unlikely tourists to becoming unlikely sleuths in this funny novel.

Octogenarians Oodles and Wish-Wash, who were drrinking mates in the first book all those years ago, have been planning to go to Ireland to retrace family history.

But they are forced to reassess their priorities when they realise no one else seems to share their concerns about the strange things happening in the normally sleepy little town.

WHAT OTHER READERS THINK

Lie of the Tiger

TOUCHINGLY FUNNY: Great style of writing which engages and makes the book even more enjoyable. Character based, and likeable characters at that JOHN MARTIN'S forte is his funny, quirky characters and there is one around every corner of Windy Mountain.IN A ROMP OF mistaken identities, hidden agendas, lost loves, and a group of wacky townsfolk, Paddy, Wish-Wash, and Oodles give their lives new meaning.Blokes on a Plane

IT READS like a comedy sketch. It's something a little different for me and it was entertaining. It's quirky, heartwarming and funny ...IT IS AN understatement to say that nothing is as it seems. Another raucous story from John Martin.Who Knew Tasmanian Tigers Eat Apples

DIDN'T WANT to put it down ... the characters were colorful and fun This is a quick read and enjoyable THERE ARE several stories going on in this book, all with humorous moments, and well developed characters.SOME OF the Australian slang was a little difficult to understand at first, but added to the flavor of the book.WHAT MORE can you ask in a cast of characters? The story itself, a quick read, is light-hearted and humorous, and a good start to a series.​