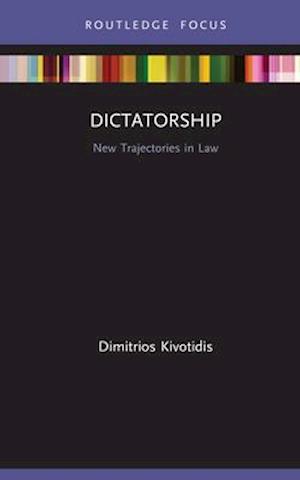 This book analyses the institution and concept of dictatorship from a legal, historical and theoretical perspective, examining the different types of dictatorship, their relationship to the law, as well as the analytical value of the concept in contemporary world. In particular, it seeks to codify the main theories and conceptions of 'dictatorship', with the goal of unearthing their contradictions. The book's main premise is that the concept of dictatorship and the different types of the dictatorial form have to be assessed and can only be understood in their historical context. On this basis, the elaborations on dictatorship of such diverse thinkers as Carl Schmitt, Donoso Cortes, Karl Marx, Ernst Fraenkel, Franz Neumann, Nicos Poulantzas, and V. I. Lenin, are discussed in their historical context: 'classical and Caesaristic dictatorship' in ancient Rome, 'dictatorship' in revolutionary France of 1789 and counterrevolutionary France of 1848, 'fascist dictatorship' in Nazi Germany, and 'dictatorship of the proletariat' in Russia of 1917. The book contributes to the theory of dictatorship as it outlines the contradictions of the different typologies of the dictatorial form and seeks to explain them on the basis of the concept of 'class dictatorship'. The book's original claim is that the dictatorial form, as a modality of class rule that relies predominantly on violence and repression, has been essential to the reproduction of bourgeois rule and, consequently, of capitalist social relations. This function has given rise to different types and conceptualisations of dictatorship depending on the level of capitalist development. This book is addressed to anyone with an interest in law, political theory, political history and sociology. It can serve as core text for courses that seek to introduce students to the institution or theory of dictatorship. It may also serve as a reference text for post-graduate programs in law and politics, because of its interdisciplinary and critical approach.