- The Print Culture of a Victorian Street 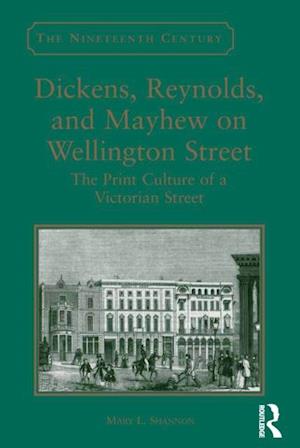 A glance over the back pages of mid-nineteenth-century newspapers and periodicals published in London reveals that Wellington Street stands out among imprint addresses. Between 1843 and 1853, Household Words, Reynolds's Weekly Newspaper, the Examiner, Punch, the Athenaeum, the Spectator, the Morning Post, and the serial edition of London Labour and the London Poor, to name a few, were all published from this short street off the Strand. Mary L. Shannon identifies, for the first time, the close proximity of the offices of Charles Dickens, G.W.M. Reynolds, and Henry Mayhew, examining the ramifications for the individual authors and for nineteenth-century publishing. What are the implications of Charles Dickens, his arch-competitor the radical publisher G.W.M. Reynolds, and Henry Mayhew being such close neighbours? Given that London was capital of more than Britain alone, what connections does Wellington Street reveal between London print networks and the print culture and networks of the wider empire? How might the editors' experiences make us rethink the ways in which they and others addressed their anonymous readers as 'friends', as if they were part of their immediate social network? As Shannon shows, readers in the London of the 1840s and '50s, despite advances in literacy, print technology, and communications, were not simply an 'imagined community' of individuals who read in silent privacy, but active members of an imagined network that punctured the anonymity of the teeming city and even the empire.