- Gilbert, E: Dhows and the Colonial Economy of Zanzibar 1860- 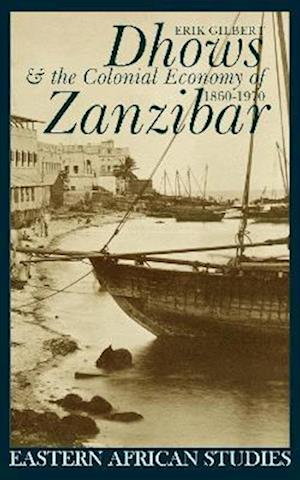 Conventional history assumes that the rise of the steamship trade killed off the Indian ocean dhow trade in the twentieth century. This study argues that the dhow economy played a major role in shaping the economic and social life of colonial Zanzibar. Dhows and the regional trade they fostered allowed a class of indigenous entrepreneurs to thrive in Zanzibar. These entrepreneurs, whose economic interests stretched across continents and colonial boundaries, were able to thwart or shape many of the colonial state's pet projects. Not only did steamships fail to drive out indigenous sailing craft, but in some cases dhows were able to drive the steamer out of specific market niches. North America: Ohio U Press; Tanzania: Zanzibar Gallery

Forfattere
Bibliotekernes beskrivelse In highlighting the role of East Africa's commercial connections to the Middle East and India during the colonial period, this book makes a major contribution to African history as part of world history.