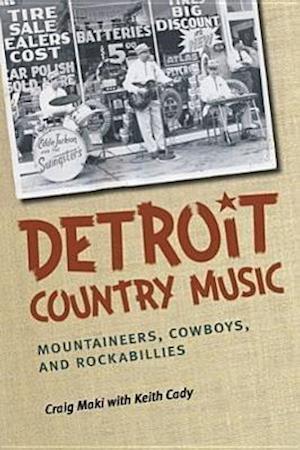 The richness of Detroit's music history has by now been well established. We know all about Motown, the MC5, and Iggy and the Stooges. We also know about the important part the Motor City has played in the history of jazz. But there are stories about the music of Detroit that remain untold. One of the lesser known but nonetheless fascinating histories is contained within Detroit's country music roots. At last, Craig Maki and Keith Cady bring to light Detroit's most important country and western and bluegrass stars, such as Chief Redbird, the York Brothers, and Roy Hall. Beyond the individuals, Maki and Cady also map out the labels, radio programs, and performance venues that sustained Detroit's vibrant country and bluegrass music scene. In the process, "Detroit Country Music" examines how and why the city's growth in the early twentieth century, particularly the southern migration tied to the auto industry, led to this vibrant roots music scene.This is the first book--the first resource of any kind--to tell the story of Detroit's contributions to country music. Craig Maki and Keith Cady have spent two decades collecting music and images, and visiting veteran musicians to amass more than seventy interviews about country music in Detroit. Just as astounding as the book's revelations are the photographs, most of which have never been published before. "Detroit Country Music" will be essential reading for music historians, record collectors, roots music fans, and Detroit music aficionados.