- Absence and the Chance of Meeting 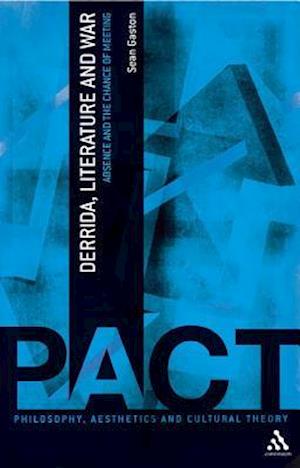 This is a fascinating examination of the relation between absence and chance in Derrida's work and through that a re-examination of the relation between war and literature. "Derrida, Literature and War" argues for the importance of the relation between absence and chance in Derrida's work in thinking today about war and literature. Sean Gaston starts by marking Derrida's attempts to resist the philosophical tradition of calculating on absence as an assured resource, while insisting on the (mis)chances of the chance encounter. Gaston re-examines the relation between the concept of war and the chances of literature by focusing on narratives of conflict set during the Napoleonic wars. These chance encounters or duels can help us think again about the sovereign attempt to leave the enemy nameless or to name what cannot be named in the midst of wars without end. His study includes new readings of a range of writers, including Aristotle, Hume, Rousseau, Schiller, Clausewitz, Thackeray, Tolstoy, Conrad, Freud, Heidegger, Blanchot, Foucault, Deleuze and Agamben.Offering an authoritative reading of Derrida's oeuvre and new insights into a range of writers in philosophy and literature, this is a timely and ambitious study of philosophy, literature, politics and ethics. "The Philosophy, Aesthetics and Cultural Theory" series examines the encounter between contemporary Continental philosophy and aesthetic and cultural theory. Each book in the series explores an exciting new direction in philosophical aesthetics or cultural theory, identifying the most important and pressing issues in Continental philosophy today.