Democratic Extremism in Theory and Practice

- All Power to the People 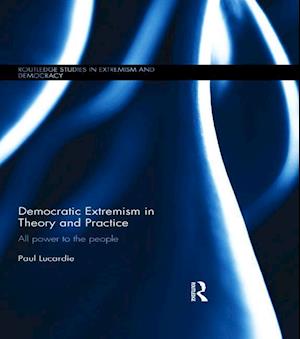 Democracy and extremism are usually considered as opposites. We assume that our system (in the UK, the USA, the Netherlands etc.) is democratic, and extremists try to destroy our system and introduce some kind of dictatorship, if not chaos and anarchy. Yet in many cases, the extremists seem sincere in their attempt to construct a more democratic polity. Hence, they can be called democrats and yet also extremists, in so far as they strive for a regime with characteristics that are more extreme in a significant sense.This book analyses radical and extreme democratic theories and ideas in their historical context, interlocked with critical descriptions of historical institutions and experiments that help to evaluate the theories. Cases range from ancient Athens to recent experiments with citizen juries and citizen assemblies, from the time-honoured Swiss Landsgemeinde to contemporary (and controversial) workers' councils in Venezuela and participatory budgeting in Porto Alegre. Among the theorists discussed here are familiar names as well as relatively unknown persons: Jean-Jacques Rousseau and Karl Marx, Murray Bookchin and John Burnheim, William Godwin and Barbara Goodwin, Anton Pannekoek and Heinz Dieterich. Whereas the extreme ideas do not seem to work very well in practice, they do indicate ways by which we could make existing political systems more democratic.This book will be of interest to students of Politics and Current Affairs, as well as inspiration to political activists and reformists.