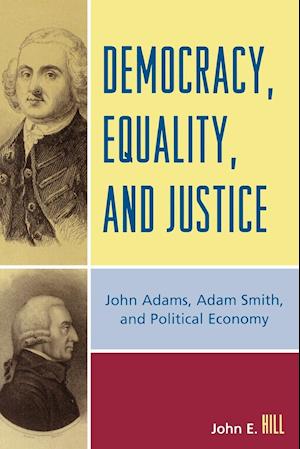 Challenging common interpretations of the political thought of John Adams and Adam Smith, Democracy, Equality and Justice offers an engaging and novel portrait of the political economy in America at its founding. The founders believed that liberty should not trump community, but should exist within the context of community. Drawing on extensive written records of the thought of John Adams and Adam Smith, the father of modern capitalism, Dr. John E. Hill argues that these two great men advocated a balanced, values-based, and just political economy. Adams, historically misperceived as a rugged individualist who favored aristocracy over democracy, actually emphasized political balance with no one socio-economic class dominating any other. Smith, incorrectly portrayed as a supporter of laissez-faire government, advocated economic balance with no class or individual receiving special treatment from the government. Applying their values of universalism and moderation today would significantly broaden the definition of morality in contemporary politics. Democracy, Equality and Justice is a stimulating and sophisticated text that will encourage debate over the relationship between historical ideas and contemporary economic problems.