- The Political Economy of Institutional Change in Colombia and Chile 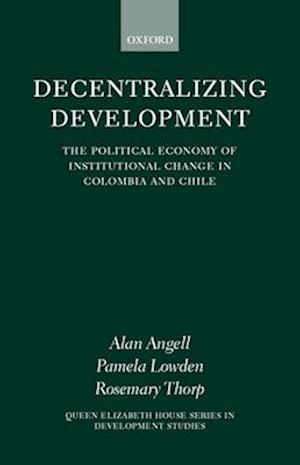 Decentralization has become a fashionable policy prescription among reformers in Latin America. But how does it work in practice? Are the claims that it promotes efficiency, participation, and fiscal responsibility justified? Does the process improve the delivery of social services at the local level and encourage the participation of local communities? What conditions allow a positive response to the challenges of decentralization?This book seeks to explore these questions by examining the experience of seven medium sized provincial towns in Colombia and Chile. The overall national context is analyzed and the differences between the two countries emphasized. Colombia embarked on a process of radical decentralization, largely because of perceived failures of the state at the central level, while in Chile the process of change was much more cautious, since a relatively efficient central state wished to maintain tightcontrol over reform. The effect on the development and politics of the seven cities is also described, and the reasons for the very different outcomes assessed. Particular attention is paid to the role of the mayor and the ability to construct a local coalition for reform. Three thematic chapters furtherexplore the impact of decentralization on the local economy and the role of the private sector in fostering development; the way in which educational reform has been advanced by local authority and community involvement; and the manner in which the new institutional structures affect the development of policies for local poverty alleviation.The authors draw on extensive fieldwork involving numerous interviews with actors at all levels and from all sectors. The result is a unique test, at the local level in Latin America, of the outcome of reforms to the institutional structure of government.

Forfattere
Bibliotekernes beskrivelse Decentralization has become a fashionable policy prescription among reformers in Latin America. But how does it work in practice? This book seeks to answer this question by examining the experience of seven medium-sized provincial towns in Colombia and Chile. tables