- Is There a Role for Markets? 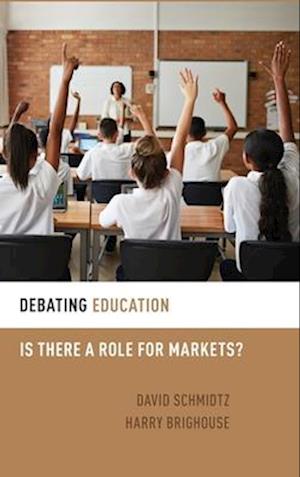 Debating Education puts two leading scholars in conversation with each other on the subject of education-specifically, what role, if any, markets should play in policy reform. David Schmidtz and Harry Brighouse each advance nuanced arguments and respond to each other, presenting contrasting views on education as a public good. Schmidtz argues on behalf of a market-driven approach, making the case that educational opportunities do not need to be equal inorder to be good. The ideal of education is not equally preparing students to win a race but maximally preparing each student to make a contribution. Harry Brighouse instead focuses on inequality, particularly the unequal distribution of rewards. He argues that justice requires prioritizing the prospects of the bottom 30% of the population, whose life prospects are much worse than justice would demand, given the current wealth of society. The moral imperative of education should be to improve this group's range of opportunities. Brighouse expresses serious skepticism that market mechanisms are capable of this task, due to imperfections ineducational markets, a lack of appropriate regulations, political influence, and other systemic obstacles.At its heart, Debating Education is concerned with the nature, function, and legitimate scope of voluntary exchange as a form of social relation, and how education raises concerns that are not at issue when it comes to trading relationships between consenting adults. It will appeal to scholars and students of ethics alike, specifically those who study political philosophy, philosophy of education, as well as individuals interested in educational and public policy.