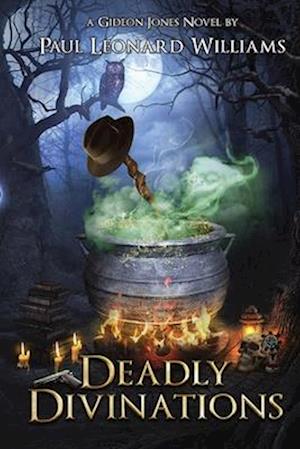 Gideon Jones is a tough-as-nails San Francisco private eye who just discovered the world is full of extraordinary and magical things... some of which don't play well with humans. They operate in the shadows, moving right alongside us in everyday life. Most people don't believe they exist, and they capitalize on mankind's reluctance to face and deal with uncomfortable truths. Gideon knows they're out there, though. Having added paranormal investigations to his repertoire, he's willing to go toe to toe with things that go bump in the night. The Order of Saint George, an ancient, secret sect of the Catholic Church, protects the laity from dark forces. Aware of the P.I.'s special skill set, they hire Gideon to look into a case involving the occult and missing children. The case takes Gideon to northern New Mexico, where he learns a vengeful witch, rage fuelled by a centuries-old grudge, kidnapped the children. He enlists the help of Isabella, a local expert in New Mexico lore and enchantments. Isabella is a whip-wielding curandera, haunted by terrible visions of the missing children. Will martial arts skills and mysticism be enough to defeat ancient spirits, bloodthirsty monsters, and the vilest of dark magic? It'll have to be if they want to rescue the children from the clutches of the ruthless bruja and escape with their lives. Deadly Divinations is the second book in the thrilling Gideon Jones Detective series.